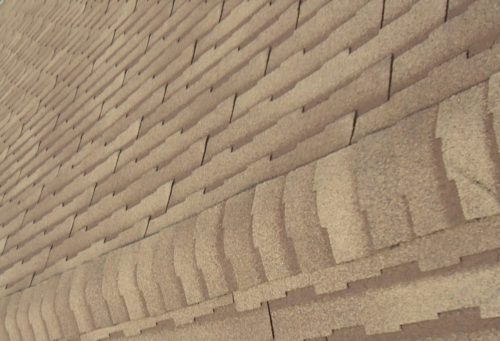 One of the best parts about having new shingles installed is the comfort afforded by the knowledge that you won’t have to worry about your roof leaking for at least another decade. Given this, it’s easy to imagine the horror experienced by Dan and Ricki as they realized their three-year-old shingles were curling and allowing water to leak into the attic. Dan called the roofers that installed the shingles, hoping that there was just some minor damage to be fixed, but all he got was a recording stating that the number was no longer in service.

Dan and Ricki’s story is typical of those who have had knockoff shingles manufactured overseas installed. The man who sold them their roof seemed honest and offered a great price. The shingles came packaged in a well-known manufacturer’s wrapper and even had the CSA mark of approval on the wrapper. However, the resemblance was only superficial; the shingles Dan and Ricki had installed were of a vastly inferior quality compared to the Canadian-made shingles they thought they had purchased.

The biggest – and most obvious – problem with knockoff shingles is that they typically weigh much less than the Canadian-made shingles they purport to impersonate. Canadian shingles usually weigh between 70-80 lb., while the knockoffs come in at under 50 lb. This difference is significant, and reflects the disparity in the quality of the shingles. Counterfeit shingles manufactured overseas are usually lacking key components, such as asphalt and minerals, that allow Canadian shingles to withstand the elements. This is why roofs that were shingled with knockoffs are being replaced in less than 10 years, and often under five.

The weight difference can be hard to notice if you don’t know how heavy a quality bundle of shingles should feel when you pick it up. However, an experienced roofer who handles hundreds of bundles of shingles every week should be able to tell instantly whether or not the shingles are Canadian-made.

Other Signs to Look Out For

Weight difference aside, it can be challenging to distinguish authentic Canadian shingles from counterfeits. As mentioned above, the packaging often looks identical. Here are a few tips to ensure that you’re getting quality shingles manufactured in Canada:

A thinner shingle: As would be expected given the lighter shingle, imported knockoffs are noticeably thinner. When held up to an authentic shingle, you will likely be able to tell the difference.

Significantly cheaper quote: If the price that you’re quoted is less than half of what the more established competitors quoted, the reason could be that the shingles they are using. However, this is not always a sure sign. Sometimes the difference in quotes is due to one company paying their employees unfairly. Also, some companies will charge the same as their competitors while still using faulty knockoffs.

Many people find the idea that someone would create a knockoff of a heavy, relatively inexpensive product such as shingles, only to ship it overseas, bewildering. Unfortunately, this is not the first time something like this has happened. Defective Chinese drywall has been called “the biggest environmental crisis to hit North American homeowners and builders in decades.” The drywall, which has been shown to be both defective and toxic, is manufactured overseas and is sold in North America at about half the price of locally manufactured drywall. It’s too soon to say what the consequences of the rise of counterfeit shingles will be, but given the similarities to the Chinese drywall scam, it’s safe to say that these shingles should be avoided by any means necessary.

While initially affordable, having counterfeit shingles manufactured overseas installed will end up costing more in the long run. Always make sure that you’re getting Canadian-made, CSA-approved shingles when having a new roof installed. For more information and a free estimate and consultation, contact Edmunds Home Improvements.

PrevPreviousSteel, Fibreglass, or Wood: Choose the Best Material for Your New Entrance Door System
Next3 Things to Look for When Shopping for New Vinyl WindowsNext

Get your free in-home estimate or drop by our showroom today!